FROM: "MARTIAL ARTS OF YESTERDAY, TODAY AND TOMORROW" - READ THE FOLLOWING INTERVIEW SENSEI KATHY HAD WITH THIS NEWSPAPER......

March Newsletter Fun Fun Fun at the Okanagan Open This past weekend Lake Country Judo and the Kelowna Judo Clubs hosted our annual Okanagan Open. This was a developmental level tournament designed to introduce young judoka to judo competitions. We had at least 8... 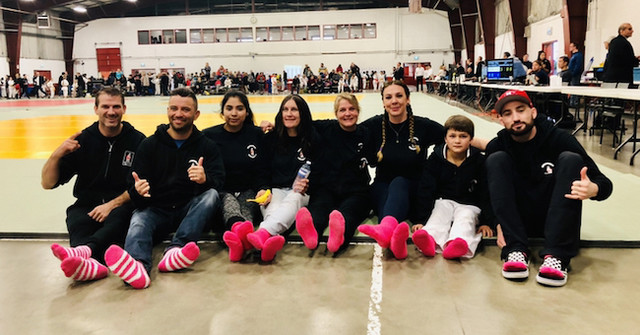 Lake Country Judo Club is celebrating after a sweeping win at the Abbotsford International Judo Championships.

It’s the first time the club has competed there in years, after being taken over by local black belt national champions Chris Smiley and Kathy Hubble.

“These guys really know how to represent a club and a community,” said Hubble. “They were humble and full of graciousness in both victory and defeat, always shaking their opponents’ hands and full of smiles and cheers for everyone, no matter who was out there fighting. They are awesome examples to have in the club and at the tournament.

“Overall, Chris and I and our assistant coach Krissy Mulholland were overjoyed with how our competitors did and how sportsmanlike they were as well. Not only did we make an impact with our neon pink socks and exuberant cheering for everyone, I think it was a pleasant surprise for all of Judo BC to see that Lake Country Judo is back and making a statement.”

The team wore pink socks throughout the entire tournament to show their support for cancer research.